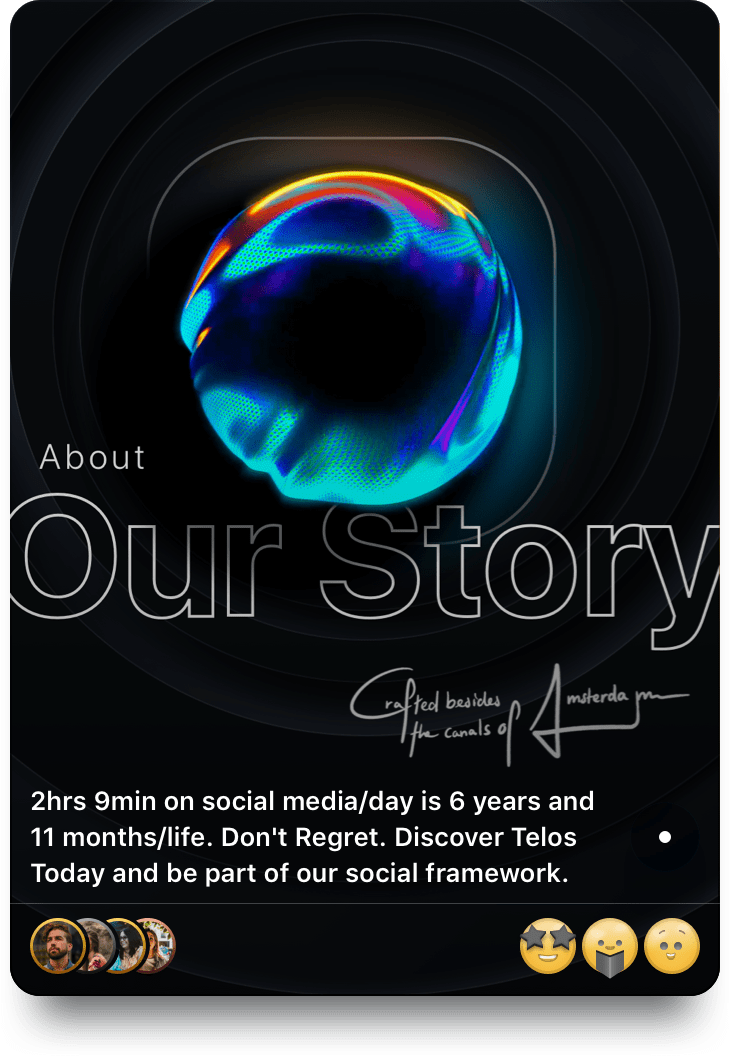 Our story
2hrs 9min on social media/day is 6 years and 11 months/life. Don't Regret. Discover Telos Today and be part of our social framework.

Facebook (+1.214B), TikTok (+250B), and YouTube (+170B), to name a few, currently define the internet and operate in the 'attention economy' being appropriately dubbed “surveillance capitalists”(1). Their business model requires one thing and one thing only for their 'free' services: Time On Device (TOD). The more screentime, the more these enterprises profit. Have they succeeded? Well, despite our belief that we are the sole authors of our own behaviour, it is not a coincidence that suddenly the desire for screentime collectively has skyrocketed since the rise of social media.

We grant Facebook products on average 56 minutes of our day. If that doesn't sound like a lot, that is effectively 1/16 of our waking time alive. Right now we are spending 2hrs and 9mins a day on social media, doing what? Trying to be a little less alone and find our way. The problem is that these entertainment hubs that we call "social media" are intended to glue our eyes to the screen indefinitely. 2hr and 9m on average does not encapsulate the 4hrs/day screenagers (a future generation of leaders) spend, but if it would… that is 6 years and 11 months spent passively scrolling over the course of their lives. So what do we have to show for this trade-off that costs us so much?

Services like Facebook, Instagram, TikTok, Snapchat, and YouTube may not have deliberately set out to become the most sophisticated vacuums of attention in human history, but they surely intended to at least change our social lives forever. And they did. Especially for those most manipulable and defenceless; those who haven't yet discovered who they are; those who instead of having relationships, are their relationships: young people. Suicide among young people has gone up by 56% in the last decade; outpacing the average trend. Tweens (10-14) hospitalized for self-harm has been up 189% since 2009 (2). Over the same period, suicide among girls between 15-19 has increased by 70%. Psychologists like Jonathan Haidt urge us to restrict screen time to a maximum of 2 hours a day (3). Going over 2 hours reliably promises a surge in anxiety, depression, and suicide. In reality, however, the average teen (13-18) currently spends 7 hours and 54 minutes on screens on any given day (4). This does not include school or homework. But averages are misleading because the behaviours vary widely; 18% of both teens and tweens in the US are glued to their screen for about +10 hours a day. To be clear, even psychologists warn us that this is not normal. Anxiety is now 20x more prevalent than it was two decades ago, suicide is 10x more prevalent than fifty years ago (5), and on average we now have 50% fewer ties whom we consider to be “close friends” (6).

It is one thing to call these services useless. That would mean the extraordinary costs they bear aren't worth the supposed benefits. No, unfortunately, things are much bleeker: based on the latest research done by psychologists these services appear worse than useless; they are counterproductive. We are more connected, yet we are more isolated, lonely, distrusting, and envious than ever. We deserve tools that are on our team and look out for our interests. We deserve a paradigm shift in the everyday tools that we resort to in order to become happier, more fulfilled, and more productive.

We believe people deserve digital instruments that help us focus and think rather than distract and diminish. To be able to talk privately with our close companions instead of being tracked and recorded; to experience the world together instead of needing to keep up with everybody alone in our rooms with a thousand plus strangers dubbed "friends"; to be part of an authentic community that meets offline, instead of trying to out-compete each other through self-aggrandizement and induced envy. We do not need yet another social network; we need the next social framework.

Our mission at Telos is as follows: we believe every human being feels the innate desire to live, love, learn, and leave a legacy. We foster a future where more autotelic hearts and telic minds walk this earth and experience indelible moments. Offline. Together.

For people overwhelmed by the volume and velocity of modern life. Always distracted by newsfeeds and chats deliberately designed to hold attention indefinitely; who are in search of themselves,  focus, privacy, and offline companionship, our app, Telos, equips people with the essentials to deliberate, communicate and collaborate in the 21st Century. Unlike social networks which are centered around self-comparison, increasing screen time, which leaves us more addicted, constantly interrupted, lonely, confused, and overwhelmed. Free of charge, we offer the world’s first social framework centred around self-development. A wholesome all-in-one system for all your to-do’s, reminders, events, habits, projects, and much more in order to direct time and energy in harmony with values, as we put our phones back in our pockets as fast as we possibly can.